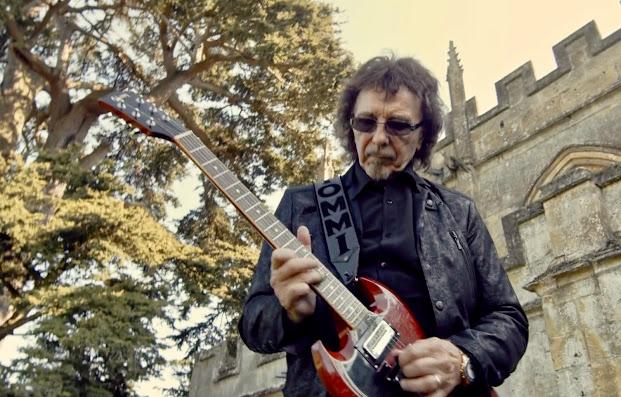 WHEN Tony Iommi famously sliced off the tips of his right hand fingers in a metal press at the age of 17 he feared he would never play guitar again.

He defied the odds and conquered the world with Black Sabbath, of course.

When he was diagnosed with blood cancer lymphoma in 2012, he started planning his own funeral. This time there was more at stake than music.

He battled back, took to the Sabbath swansong stage, and is now in remission.

Then along came Covid-19 and – just a few weeks ago – another accident, this time at his Cotswolds home, that left him fearing once more for his career.

Just as he returned with a new band, his first new music in eight years, and the launch of a signature scent, the horizon was clouded by concern.

The long-awaited new track - his first in eight years

“I snapped a tendon in my left arm – my one good arm,” he reveals. “A delivery man came with a a big box on a pallet – it contained 200 bottles of the perfume we’d just developed. I said I’d give him a hand but as we were walking through my hallway, I went flying.

“I grabbed to save the box because I didn’t want the bottles to smash, and – bang! – my tendon just snapped. I knew what it was because the pain was horrendous. I realised that I’d done some serious damage somewhere.

“I couldn’t move my arm at first. It was bruised from the wrist right up to the shoulder where it had snapped from.

“I went last week to have an MRI scan, then back to the Priory Hospital in Solihull for the results. They said I’d left it too late to repair. If the tendon shrinks, and you don’t get it done within the first week, it can be a big problem. 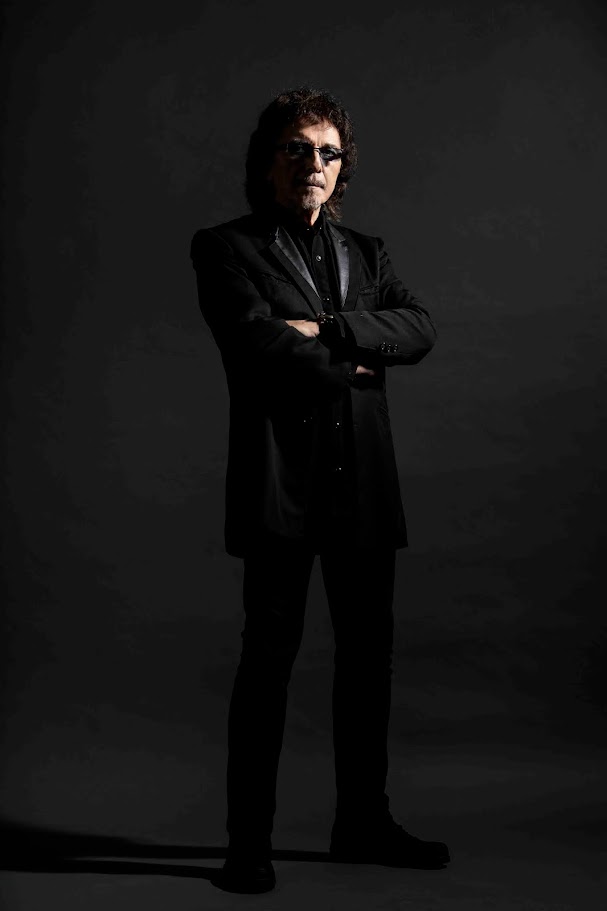 “They could take a tendon from my leg to fix the problem but the consultant said he wouldn’t like to guarantee that I’d be able to straighten my arm afterwards. Even if I could, he warned that it might take over a year.

“I thought ‘Forget it’. It’s OK. I can still move it round enough to play guitar – that was the main thing for me. That was what I was really concerned about.”

The injury means that Tony cannot pick up heavy objects but has not stopped him carrying on with this week’s big heavy metal comeback. 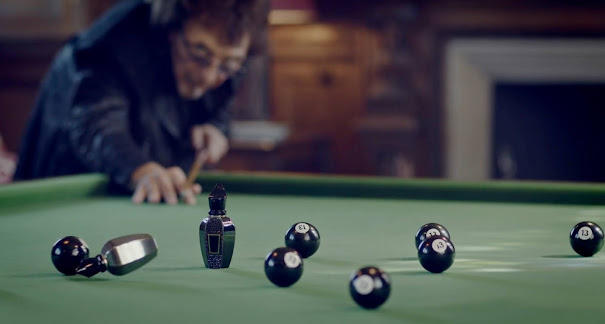 Tony and the new scent, filmed at Sudeley Castle

The 73-year-old guitar hero has recorded a four-minute rock single titled Scent of Dark, initially to promote the new scent of the same name he has designed with Sergio Momo, designer for Italian luxury perfume house Xerjoff.

Over the past 18 months he has been working secretly on the new scent, which recalls the heady patchouli days of rock festivals in the late 1960s and 70s, and hits stores ahead of Christmas.

“It’s mainly patchouli,” says Tony from his second home in Sandbanks, where Harry Redknapp is a near neighbour, on the South Coast. “I didn’t know this but apparently they used to use the smell of patchouli oil to get rid of the smell of people smoking dope back in the day. 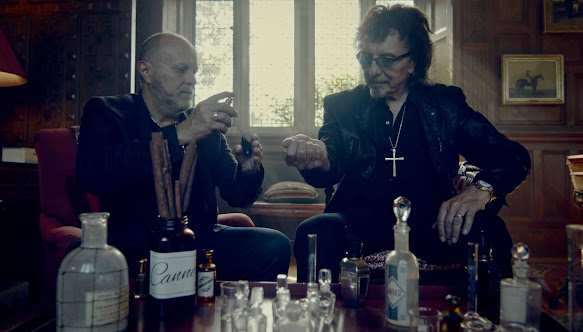 Tony and Sergio comparing notes in the new video

“The main ingredient is patchouli but there’s a lot more to it than that. Sergio asked me to list my favourite smells – like the new car smell, leather, strawberries and raspberries – and added stuff that he thought was right until we were very pleased with it.”

It was the decision to record a heavy rock riff to promote the perfume that fuelled Tony’s hunger to return to the fray after a frustrating pandemic lockdown.

Still in remission from lymphoma, with which he was diagnosed in 2012, the Sabbath legend had to self-isolate at his house in Broadway because of his weakened immune system – and still wears a mask whenever shopping or at an indoor event.

“I was petrified, to be honest,” he admits. “I had to be really careful with everything. I really did cut myself off for quite a while. You start going a bit mental because you can’t do what you normally do. It stopped me from working so much musically because people couldn’t come in your home.

“When restrictions were eased, my friend and producer Mike Exeter came round again but we both had masks on and it was crap, sitting there with a mask on and trying to get into something. Oh blimey. It just seemed odd so we didn’t do that much in the end. 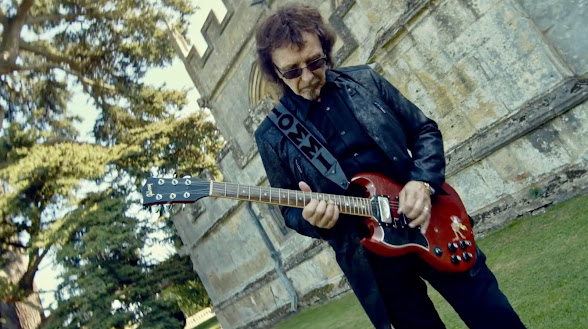 Tony soloing in the Scent of Dark video

“My wife Maria and I had just bought the house in Sandbanks when the pandemic hit, and we couldn’t travel down to sort it out because all but essential journeys were banned. That was very frustrating too. Then my daughter Toni and her partner got Covid and we couldn’t see them.

“As things eased off a bit, I did this thing with Robert Plant. We signed a guitar for charity. He came over to my house and we did it socially distanced in the garden while Maria took photos of us both with our masks on. We both had gloves on, too, sitting there drinking coffee.

“Eventually we were able to go down to Sandbanks and that has kept me busy, with work being done on the house. Now, when we’ve had all the jabs and everything, hopefully we’re all a bit safer – but I still wear a mask whenever I go shopping or to get petrol.

“I don’t like them but I’d rather feel safer wearing one – and you’re also protecting other people.”

Tony still has regular blood tests to monitor his condition. A private doctor visits him at home when required, and he has tests and check-ups back at the Spire Parkway Hospital in Solihull, where he was treated for his lymphoma.

Scent of Dark is Tony’s first new music to be released since Black Sabbath’s ’13’ album back in 2013,  four years before the band played their final farewell in hometown Birmingham. 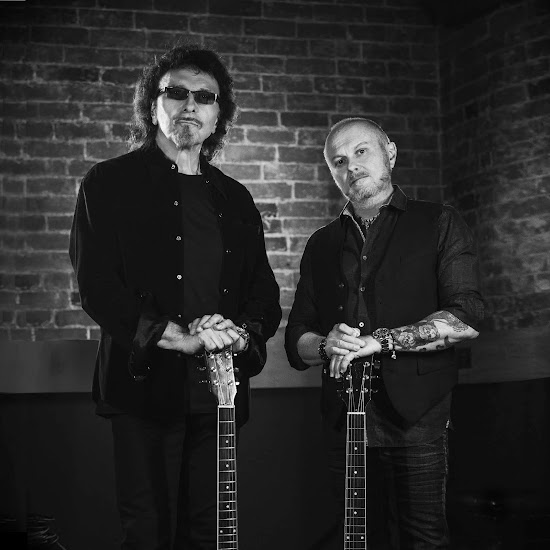 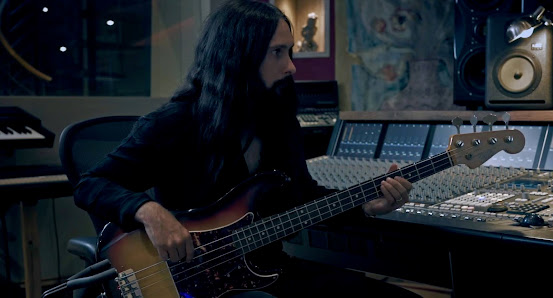 “It’s based on a riff I’ve had around for some years,” says Tony. “It wasn’t right for a Sabbath album but it just seemed to fit this project. I added some heavier, doomier bits so it’s part old and part new, but we’re all really happy with it. 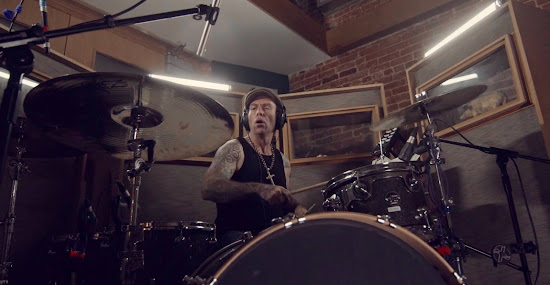 “I knew Jimmy, Mike and Sergio – he plays guitar as well as making magic with scent – but I hadn’t met the others before we went in to do the session. I developed a band overnight and it worked so well that I’m definitely going to make an album now.” 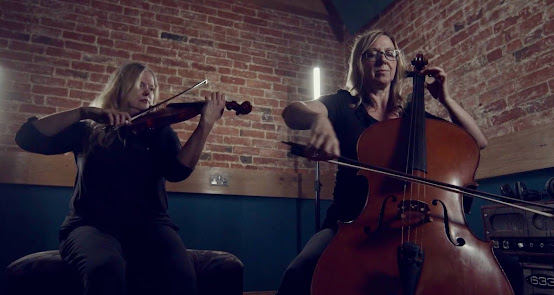 In the meantime he has also played on a charity track with fellow Brummie and Pink Floyd drummer Nick Mason and appeared as guitar guest on a track by metallers Candlemass, earning him a Grammy Award nomination for best heavy metal performance.

Next up is a collaboration with old bandmate Ozzy Osbourne, for whose new album Tony has written, and played on, a track titled No Escape From Now. A stellar guitar line-up also includes Eric Clapton, Jeff Beck and Zakk Wylde.

“I don’t know what it sounds like, mind,” he smiles. “I haven’t heard it yet. I wrote the track for Ozzy, sent it to him and he really liked it. I recorded it at home, with Mike Exeter on bass and programmed drums. They’ve had Chad Smith from the Red Hot Chilli Peppers re-do the drums.

“I still talk to Ozzy a lot, and keep up with Geezer and Bill from time to time. I just wish Ozzy wouldn’t forget the time difference and call me from the States at two in the morning!” 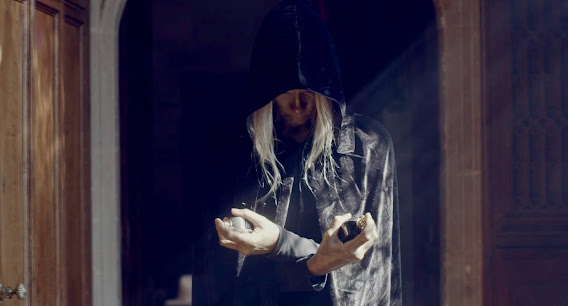 Who is the ghost in the video? It's someone you won't expect, that's for sure. All is revealed in my sister blog paulcoletravels.com