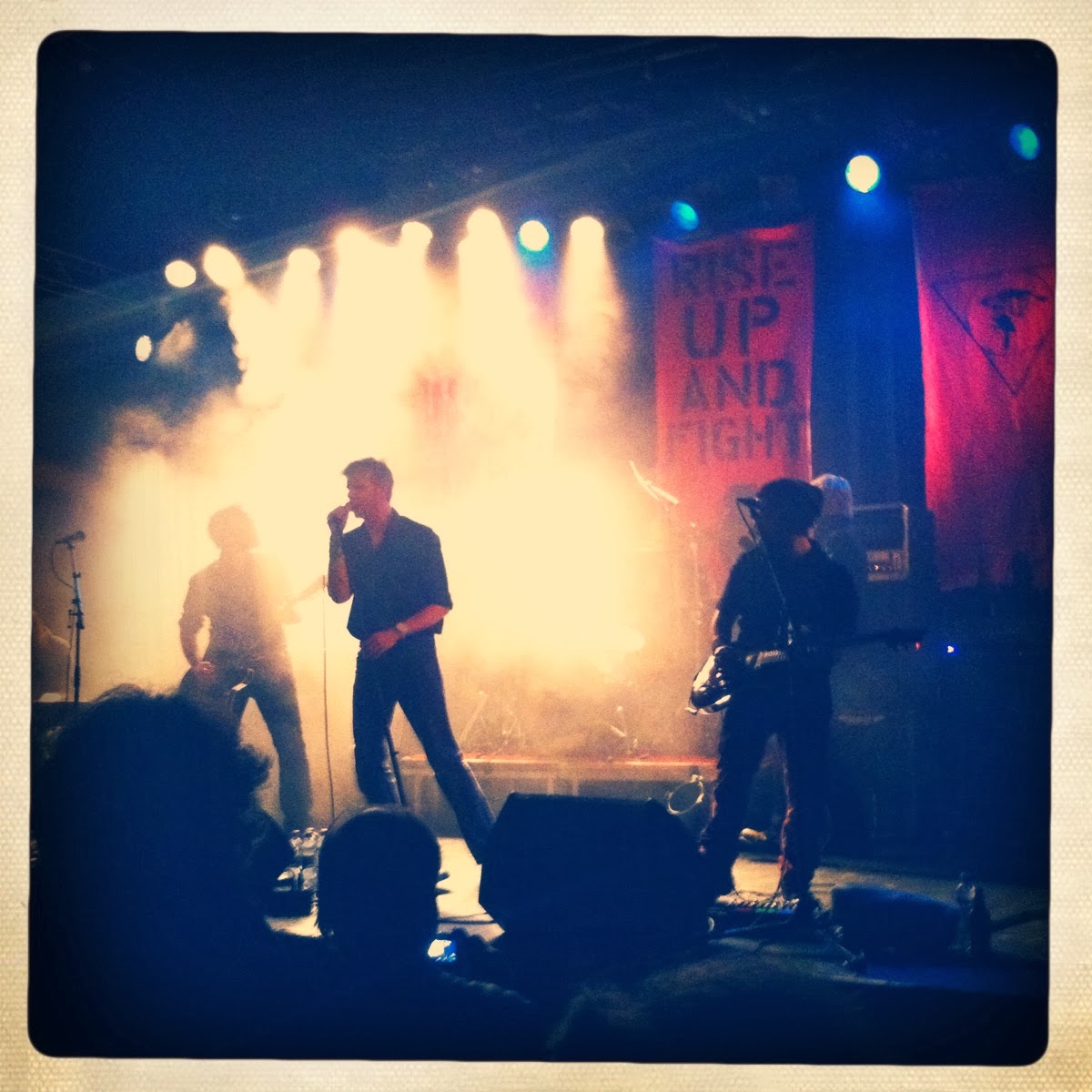 You wait years for a new Pink Floyd album to arrive and then... nothing comes all at once.Thank God, then, for Crippled Black Phoenix, whose new album White Light Generator is shot through with Floydian flourishes.Drifty intros? CheckWhispering voices? CheckGilmourian guitar? CheckWright-on keyboards? CheckLight and shade? CheckBursts of aggression? CheckFollowing their Poznan live double, CBP return with a studio set divided into a black side (rocky) and white side (not so rocky).But it’s not as black and white as that.Because after faux intro Sweeter Than You (Seamus, anyone?) the lengthy two-part No! sounds like a Floyd out-take.No, scrub that. It sounds like Floyd at their best, certainly better than the band’s latter years output.But then standout Let’s Have An Apocalypse Now is more Sabbath than sonics, and Black Light Generator nods to Hawkwind.And Parasites is a song Primal Scream would holler for. 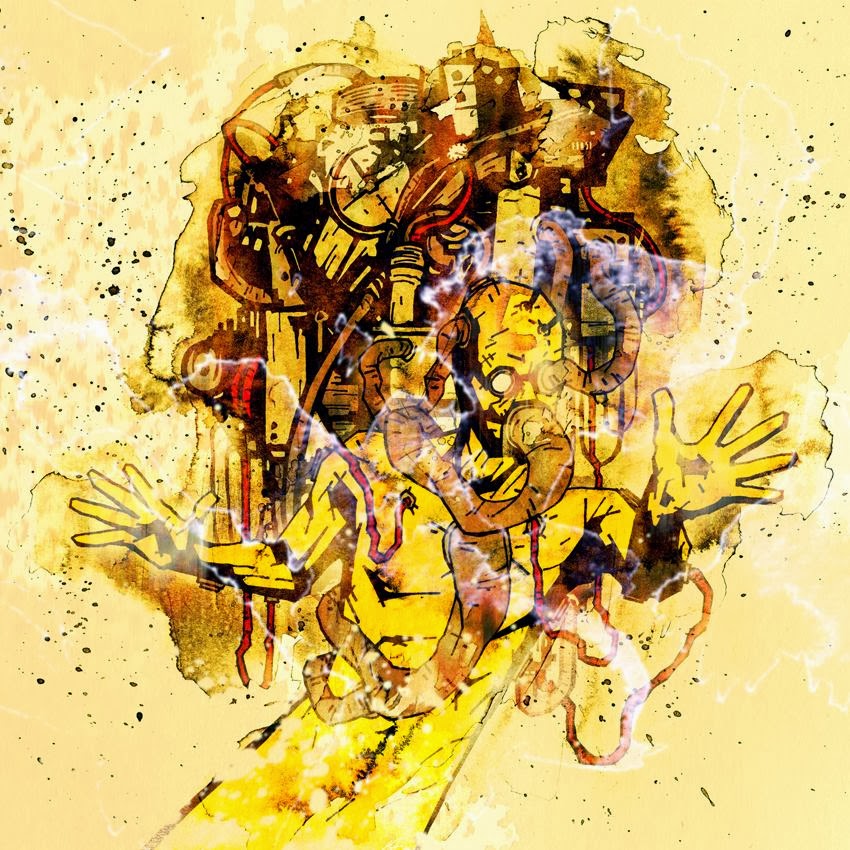 There’s an untitled spoken word bridge, then Northern Comfort springs a surprise.Opening like a leaden old school rock and roll driving song, it takes a turn to the East, picking up exotic scales and key changes.Wake Me Me When It’s Time To Sleep is back to Pink Floyd.Caring Breeds Horror and You’ll Be Murdered continue in similar vein before the gentle We Remember You gradually builds musical muscle.But it’s left to A Brighter Tomorrow to up the ante again, and again it’ll delight frustrated Floyd fans with its neo-Western synth-horns.Says frontman Justin Greaves: “I wanted to make an album that’s more simple, just good songs which are more about feeling than musical prowess, and with less meddling and manipulation in the production.“I think it came out well as a result. If you like older, more warm and mushy, less sparkly clean sounds, then maybe you’ll like this.”Interesting. Could have said the same about Meddle back in the day.What’s most surprising is that CBP are mostly Brits, a sort of prog-rock co-operative whose members shift and change.Catch them live on UK tour in May. Here are the dates:May 23: O2 Islington Academy, LondonMay 24: Academy 3, ManchesterMay 25: Liquid Rooms, EdinburghMay 27: Robin 2, Bilston, Wolverhampton

A Great Big World : Say Something 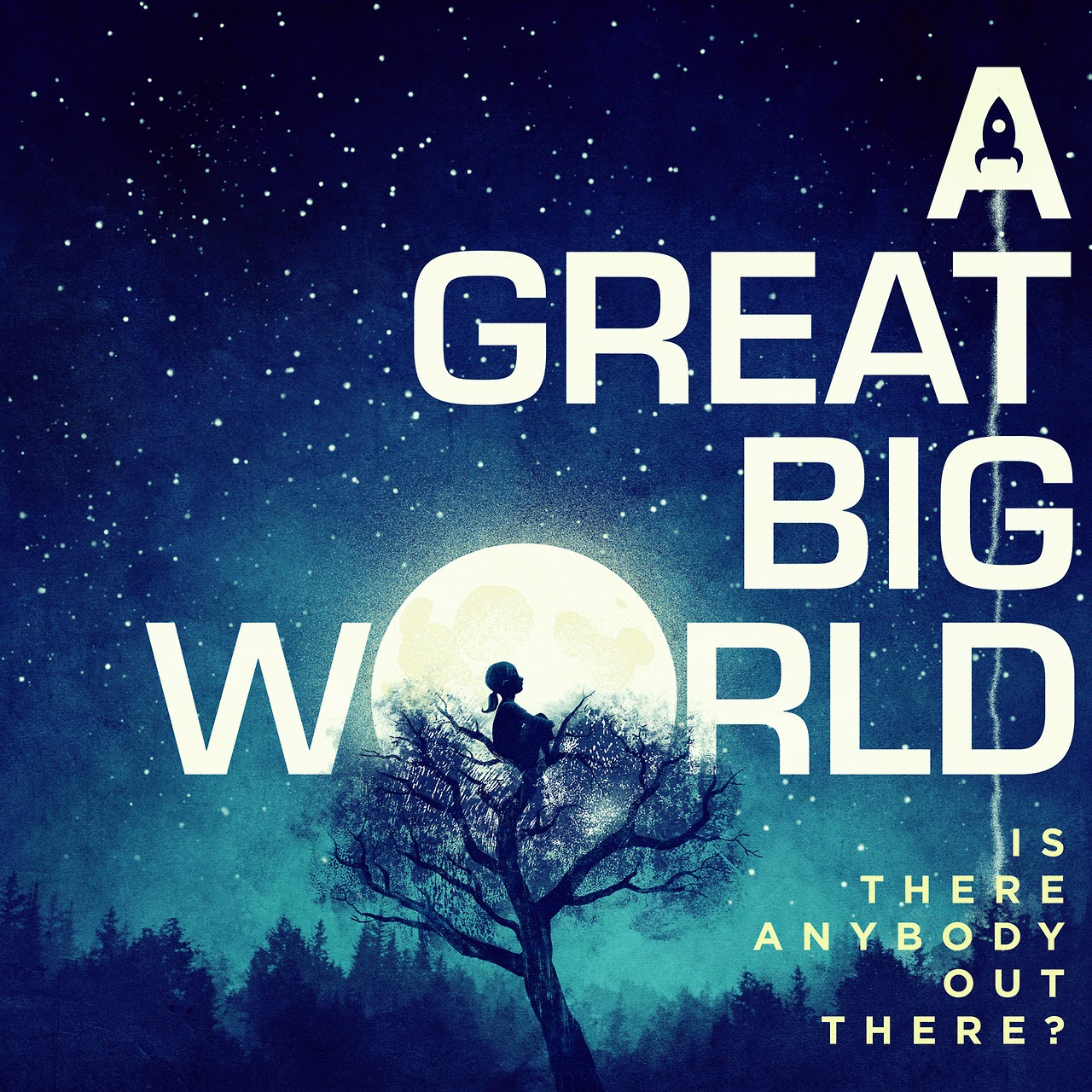 New York duo Ian Axel and Chad Vaccarino go global with Is There Anybody Out There?

It's a debut album built of finely crafted, quirky, singer-songwriter pop highlighted by single Say Something, featuring a surprisingly subtle guest spot by Christina Aguilera.
She heard the song, pleaded for the chance to join in, then watched as it swept the States after featuring on TV shows including The Voice.
Now released here in the UK, the song will put you in mind of Damien Rice’s The Blower’s Daughter with its emotional punch and melancholic melody.

It's just one of those timeless tracks that will be everywhere.

Take a look at the heartbreaking video... 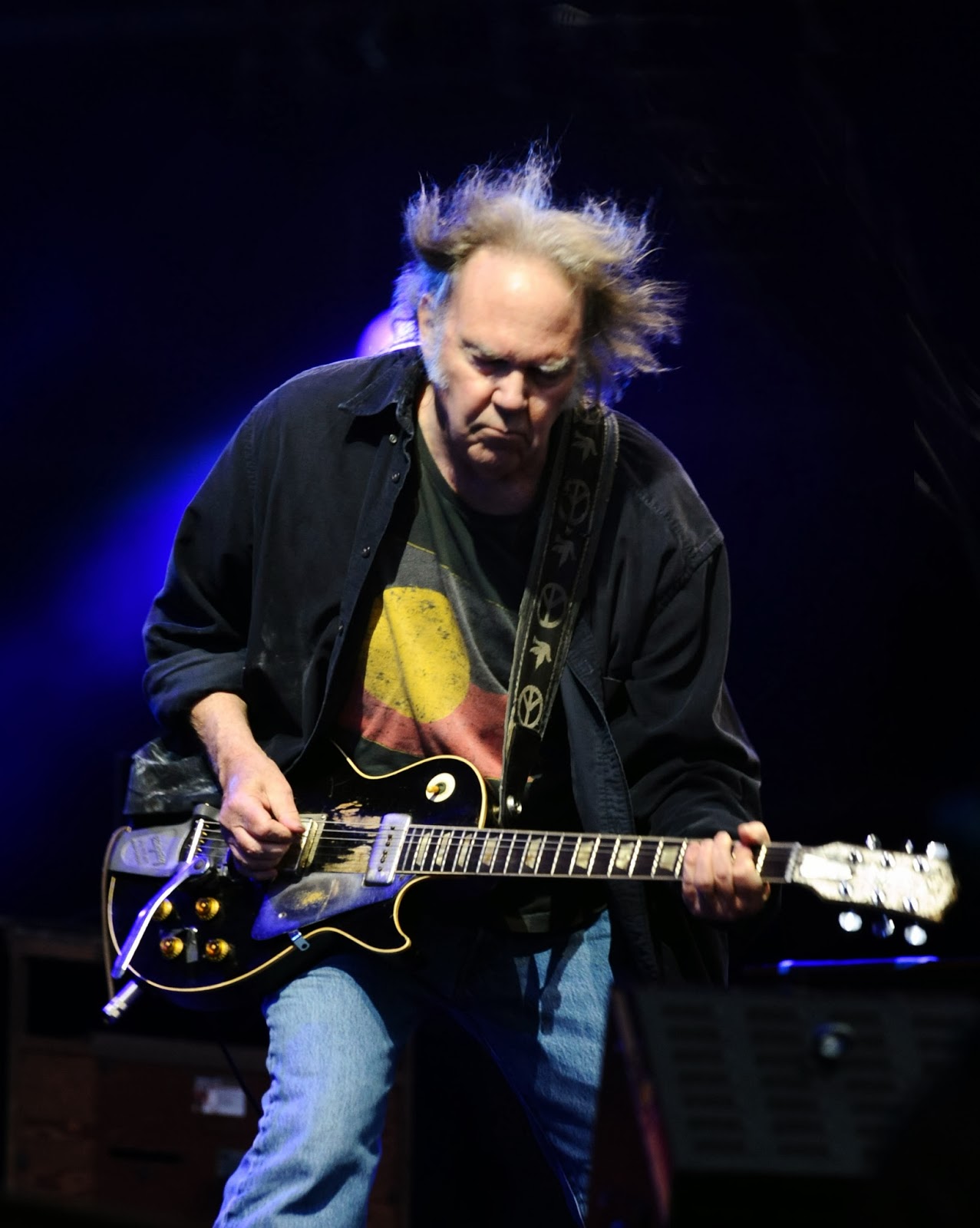 Neil Young & Crazy Horse have announced a UK gig.They’ll be playing the Liverpool Echo Arena on July 13.Last summer’s shows in support of the Psychedelic Pill album were heralded as some of the greatest live events of 2013.But a Liverpool date of the tour had to be cancelled after an injury to guitarist Frank “Poncho” Sampedro.Tickets for the show are available at www.echoarena.com or by calling 0844 8000 400.No word yet on whether local hero Ian McNabb will be available for the support slot.The former Icicle Works frontman had been set for the original date.Neil Young & Crazy Horse – completed by Ralph Molina and Billy Talbot – also recently announced a Barclaycard presents British Summer Time show in London’s Hyde Park on July 12.The line-up also includes support from artists including The National and Tom Odell.
Posted by Unknown at 07:31 No comments: 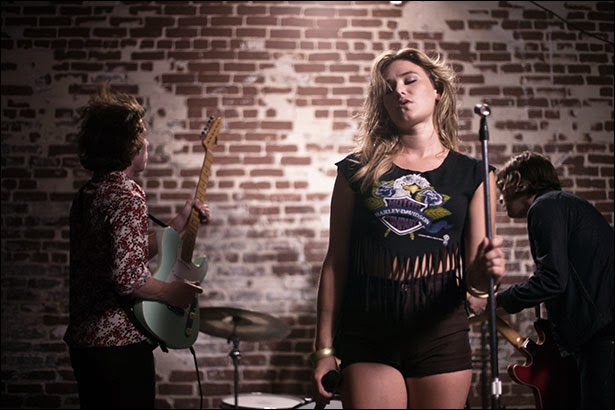 “I love the smell of whisky, and I hate the taste of gin, but I’ve always been at home in a place that’s soaked in sin...”
Yep, Colleen Rennison’s back in town. Winter suddenly got warmer.
The 25-year-old Canadian blues belter fronts No Sinner, the band everyone’s talking about since Amazon made Boo Hoo Hoo their free single of the week.
No Sinner? It’s Rennison in reverse. Geddit?
The band’s debut mini-album Boo Hoo Hoo came out towards the end of January in the UK, and it’d be a sin to miss it.
Because Colleen Rennison is a hard-singing, hard-loving, hard-drinking, hard-working throwback to the icons she grew up listening to – Nina Simone, Tina Turner, Joe Cocker, Big Mama Thornton and Bessie Smith.
“People have told me I sound like Janis Joplin since I was five years old,” says the Canadian songbird, who has a penchant for denim cut-off pants.
“My mom was a little wary of introducing me to Janis’s music at an early age. Maybe she wanted to keep me away from sex, drugs and rock ‘n’ roll as long as possible.”
If that was the case, mom failed miserably because Rennison is inciendiary. 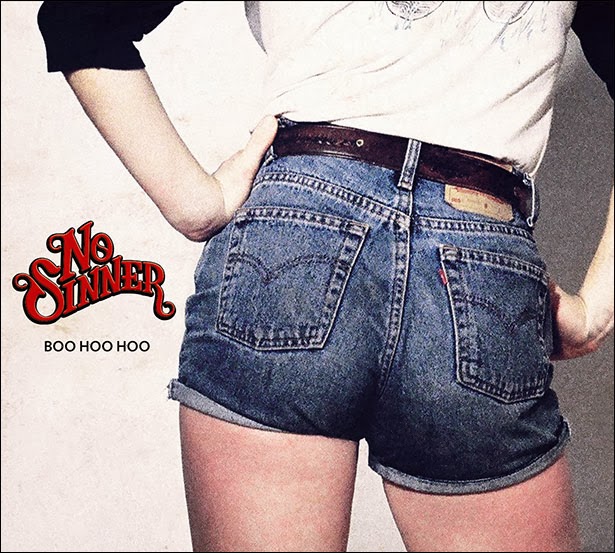 The mini-album finds her in the bad company of guitarist Eric Campbell, drummer Ian Browne and bassist Bradley Ferguson. Back home in Canada, they’re already building a huge reputation.
Boo Hoo Hoo travels from the juke-joint jump blues rockabilly of its title track to the bad-ass blues rock and roll of Devil On My Back, which finds Matt Camirand’s scuzzy bass moonlighting from the Black Mountain day job.
Running is Delta swamp, albeit more Quo than Creedence; Love Is Madness rides a Motown bassline and has a Dusty Springfield “Spooky” vibe; Rise Up is a spiritual for which Rennison smooths out her world-weary vocal.
There’s a cover of Nina Simone’s version of Nat Adderley’s Work Song, but it’s That’d Be The Day that sends shivers down the spine as Rennison duets simply but soulfully with Campbell’s softly overdriven guitar.
No Sinner’s music, says Rennison, is about the clash between the sacred and the profane, the preacher and the devil, the sins of Saturday night at the being washed away on Sunday morning in church.
It’s the contradiction at the very heart of rock’n’roll.
“We need a healthy dose of good and evil in our lives,” says Rennison. “Music is a medium between us and the spiritual world. Our songs express the gamut from sinful to celestial.”
So how did it all start after she heard Janis sing Mercedes Benz.
In her hometown of Vancouver, Rennison started writing songs with Parker Bossley (formerly of Hot Hot Heat) and joined up with future band members Campbell and Browne, for a weekly Thursday night residency at Guilt and Company, a club in Vancouver’s Gastown district.
“I honed my chops, my stage confidence, my style and versatility,” she explains. “I learned to play with other musicians.”
Known for performing in a T-shirt and cut-off jeans, Rennison’s larger-than-life, whiskey-swigging, last of the red hot blues mamas is no act. 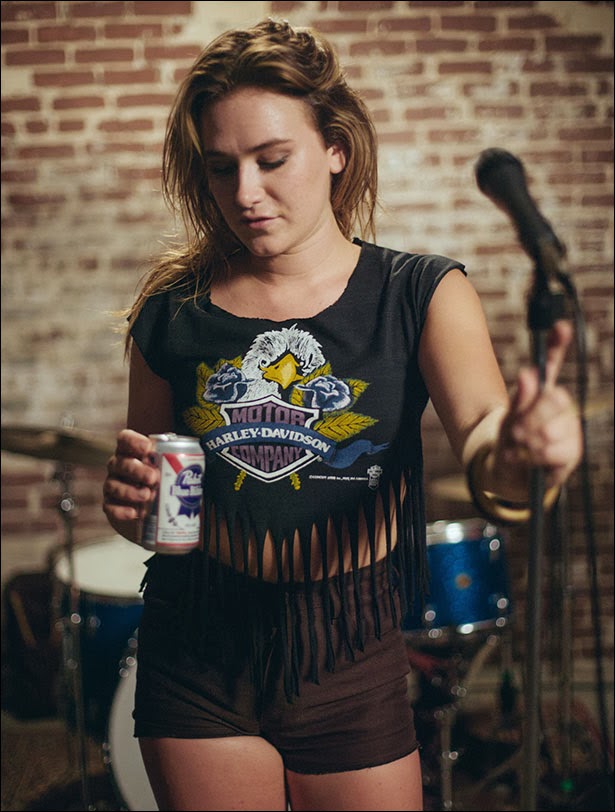 “So much of the music I started listening to as a girl came from churches and gatherings where people congregated and sang their blues away,” she says.
“‘It’s a dirty business loving me,” I warn in If Anything,” she grins. “That’s a disclaimer for anyone who wants to get involved with me.
“I’m warning you now.”
Rennison is an old soul, wiser than her years might suggest. “I want to bridge the gap between class and trash,” she says. “I love the idea of these women who very much lived in a man’s world, touring on the road.”
Certainly her performance echoes Maggie Bell’s early days in Stone The Crows, and traces a path all the way through to contemporaries such as Gin Wigmore. It’s old school and proud of it.
“We write whatever comes to us. We’re fans of a variety of different sounds and all kinds of music. We’re inspired by the way bands like Black Rebel Motorcycle Club, early Kings of Leon and the White Stripes brought the blues and rock back to basics.
“We’re into so many different styles of music that we have the liberty to do what we please. We really don’t have a formula.
“We’ve here to make our own mark. Now stop asking questions, and listen to the music...”
Posted by Unknown at 01:23 No comments:

Email ThisBlogThis!Share to TwitterShare to FacebookShare to Pinterest
Labels: Colleen Rennison, No Sinner 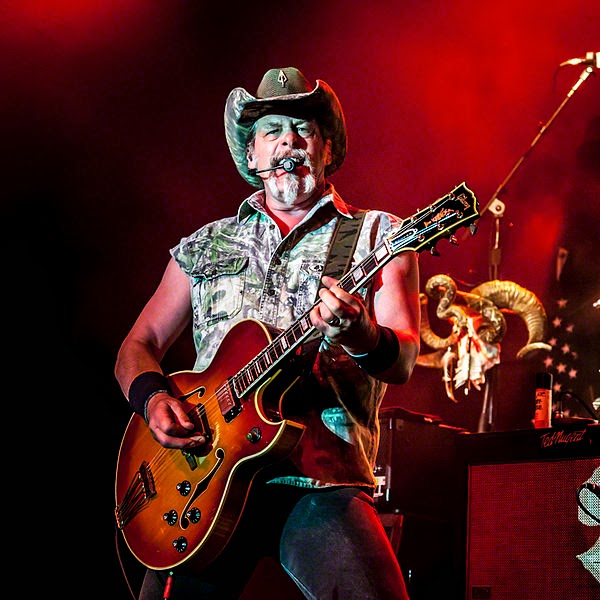 In an explosive way. And usually involving hunting dogs.

He has, of course, lambasted Barack Obama; he has hinted he may stand for public office.

Earlier this year, at a Las Vegas hunting and outdoor trade show, the Michigan marauder was recorded stating: “I have obviously failed to galvanize and prod, if not shame enough Americans to be ever vigilant not to let a Chicago communist-raised, communist-educated, communist-nurtured subhuman mongrel like Barack Hussein Obama to weasel his way into the top office of authority in the United States of America”.

His next tour is going out under the banner of ‘Black Power’.

All of which is typical of the larger than life Amboy Duke made good.

But all of which tends to overshadow a fundamental truth.

His studio albums may be patchy (don’t get me started on Damn Yankees) but Ted Nugent’s gigs pack feelgood frenzy. 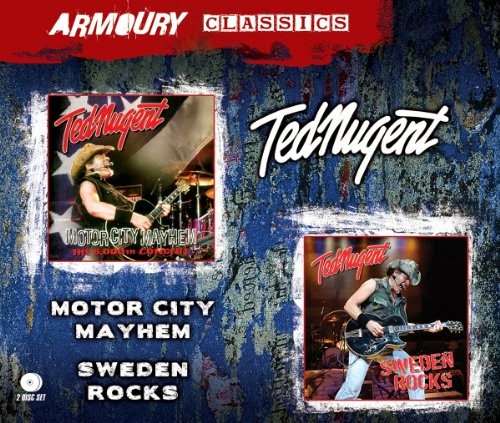 The re-release of two live albums – Motor City Mayhem and Sweden Rocks, now packaged as a double-CD set – is a timely reminder of what Nugent was placed upon this earth to actually do.

It’s an unashamed crowd-pleaser – Nugent’s 6,000th gig apparently – with Ted given to bellowing “Free-e-e-dom!” in every other song.

All the hallmarks are here, Wango Tango, Wang Dang Sweet Poontang and Free For All served up in inimitable fashion.

There’s a Hendrix-inspired Star Spangled Banner (well, it is July 4) and covers of Bo Diddley and Baby Please Don’t Go. It’s an old-fashioned, old school rock and roll night out. With beer. Plenty of beer.

But it’s the unholy trinity of Stormtroopin’, Cat Scratch Fever and Stranglehold that remind you that, hell, Ted Nugent sure can write a mean riff.

(As he likes to inform the crowd, and at every opportunity).

The Sweden Rocks swet, originally released in 2008, offers pretty much the same songs in different order – plus the likes of Snakeskin Cowboys, Soul Man and Still Raising Hell.

And that, of course, is what the gun-loving political pensioner continues to do.

Pop it in the car player, hit the motorway and crank the volume up to 11.

It ain’t pretty. But you’ll feel a whole lot better for it. Honest.