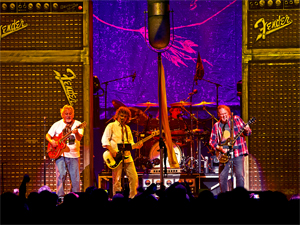 The ornery ol’ Canadian cuss beamed like a smitten schoolboy as the reunited Crazy Horse riffed vocally on fan favourite Fuckin’ Up.

Before launching into the song he’d asked the capacity crowd at the LG Arena: “Rock and roll or Cortez?” in a tone which suggested they couldn’t have both, not with scheduled stage time running out.

But, hell, he was enjoying himself. In the end, he did do both, restoring a mighty Cortez The Killer to the setlist and more, stretching an epic gig to the two and a half hour mark.

Even at the close, as the covers came down, he looked ready to rock on.

Touring with Crazy Horse for the first time in years, Young took his cues from the past. The giant Fender amps and Back To The Future scientists were straight from 1978’s Rust Never Sleeps tour.

Cue continuity not just in stage setting but also in the setlist, valiant veterans from those campaigns rubbing shoulders seamlessly with new kids on the block from the recent Psychedelic Pill.

Now 67, and famously uncompromising, Young was in a mood to please. Entering the stage under the Union Jack, and to the strains of the National Anthem, hand held on heart, he seemed invigorated.

Something remarkable seems to happen when he’s back in the company of Crazy Horse cohorts Billy Talbot, Frank Sampredo and Ralph Molina. They hit an irresistible groove which allows extended improvisation.

Right from the opening Love To Burn, walking  in the valley of hearts, Young’s guitar was spitting and sputtering, feedback-fuelled and hungry for more. Surfer Joe And Moe The Sleaze continued in the same vein.

First of the newcomers, Psychedelic Pill, set the scene for early highlight Walk Like A Giant, the lament for the failed summer of love stretching into 20 minutes or more, ending in angry, apocalyptic brutality.

Litter blew across the stage throughout the song. Whenever it ran out, a roadie emptied another carrier bag full. You could see what he was getting at, but perhaps the budget ran out.

With Woodstock’s dove of peace fluttering behind the band, they restored balance with Hole In The Sky harmonies before a solo double delight, Young strumming Heart Of Gold and Dylan’s Blowing In The Wind.

He transferred to piano for the subtle Singer Without A Song, then cranked up the amps again for a lengthy Ramada Inn, the latter a reflection on growing old but not really one of his best.

Then, remarkably, he moved up the gears. A rocked up Cinnamon Girl, a playful Fuckin’ Up, classic Cortez The Killer and Buffalo Springfield’s short, sharp and sweet Mr Soul built up momentum.

The crowd found release in set closer Hey Hey My My (Into The Black). It was touch and go for a while, with repeated calls for Rockin’ In The Free World, but the choice was spot on. Rock and roll will never die.

Way past scheduled set time, they came back on to encore with a full-length Powderfinger. Last buses? Last trains? Car park crush? No-one cared. Nobody moved. Nobody wanted to leave.

Surfer Joe And Moe The Sleaze

Hole In The Sky

Blowin’ In The Wind

Singer Without A Song

Hey Hey My My (Into The Black)

Powderfinger
Posted by Unknown at 00:57